A couple years back, I bought a Redmi Note 3 as my primary phone – And for it’s price, it offered insane value for money – I moved from a Samsung Galaxy Note 4, and i almost didn’t miss the More expensive phone (although, fair point, I missed the functionality of the S-Pen)

Now, Let’s see if the successor in Xiaomi’s Redmi Note series, is still a solid option in the budget category!

Woah…Hold on! How did you get that phone so early?! In May 2018?
Back then, this model was recently released in China, but not released officially in Singapore. But since I needed to buy a new phone for an overseas relative, I didn’t need an official warranty. So i bought it from a reputable Parallel importer instead for about $260. Buying from a Parellel importer has risks, but since it was quite a reputable shop, and i knew how to ensure that the product i bought was a genuine product, i was willing to risk it this time.

Today you can get the 32GB Flash+ 3GB Ram version officially from Xiaomi Lazada at https://lap.lazada.com/generator/banner.php?banner_id=5b399880b21c0 . Price at $299. Less risk if you buy from an official distributor (Click the phone picture in this link to get to  the listing).

Coincidentally, the version i bought is of the same specification as well. Actually if you have more money (and are willing to risk your warranty), there is a 4GB Ram + 64GB Flash version available from Parallel importers. It’ll perform slightly faster, But you’ll be taking a risk so…Weigh your options carefully!

Note: This review might not be as in-depth as my other ones, because i barely had about 2 to play with the phone. After which, i had to pass it on.

Anyway, Onward to the review. For 299, What are we getting?

Unboxing the product, we get a sim ejector tool, quickstart guide, USB-C Cable, China-Style charger, The phone itself, a matte screen protector (Pre-installed) and a soft-gel phone casing.

Honestly i was pleasantly surprised that a matte screen protector and soft-rubber jelly phone case was bundled in the box by Xiaomi. I really appreciated that as the phone hasn’t been officially released in Singapore back then, so finding such accessories locally would be quite difficult.

For $299, This phone is an absolute bang-for-your-buck! Here’s what I like about the phone:

-Great Camera for the price: Sporting dual cameras, i find the performance of the camera pretty good for the price you pay.

-Did I mention that the front – camera has it’s own LED for selfies?! It may sound like a gimmicky feature, but i started to miss it once i gave the phone to my relative!

No seriously. There IS a front-selfie LED light built in. Did you think I was joking? Have a look at this! Works well for selfies!

-Good build design and sharp, 18:9 Ratio display – As you’d expect from Xiaomi’s Products. The longer screen is great for multi-tasking.

-Headphone Jack!! (I don’t like phones without a headphone jack. Too cumbersome. Once you’ve actually used a phone without that headphone jack, then you’ll realize how silly that design is).

-Big battery (4000 mah): Combined with Xiaomi’s MIUI customizations, the phone has really long battery life. Something not every phone has (Yes, I’m Looking at you, LG!)

–To be honest, nothing much. It dosen’t come with bundled earphones, but I’m not complaining as the phone is already quite cheap, and you prolly would want to buy  a better earphone to use anyway.

-Unique to Export sets (Read: From Parallel-Importers):  Google Play services is cumbersome to reliably install on the device. But if you bought it from the link above (the official distributor), you won’t face this issue.

More pictures of the phone: 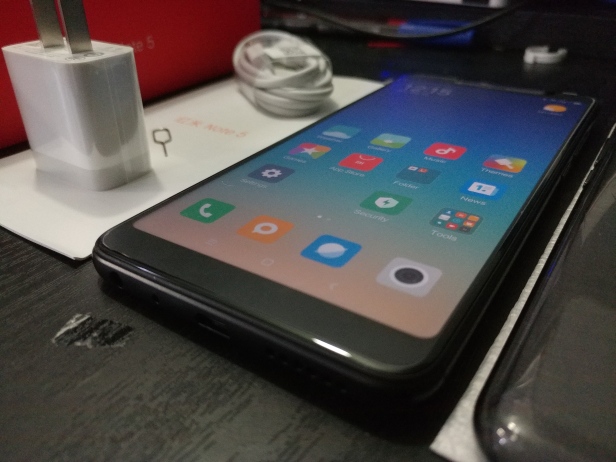 -With it’s 18:9 long display, You’d appreciate the narrow bezels on the top and bottom of the phone. In my brief time with it, i found the additional display estate great for multitasking. This type of display is hard to find on other phones in the budget segment as of now.

-See how the longer display will make gaming alot-more fun on this phone, compared to other budget phones. Yes, with the snapdragon 636 processor, it’s actually a decent budget phone to game on!

-The Dual camera optics take pretty good pictures in decent lighting environments. It’s not too bad in low light as well. A great improvement from the redmi Note 3, which struggles in Low light! Also pictured is the fingerprint sensor. I like this type of fingerprint arrangement as it feels most natural when you’re trying to unlock your phone. The phone’s back is made of matte plastic – Which is good since it isn’t a fingerprint magnet.

Xiaomi advertises that the phone has a dual camera 12MP + 5MP  setup, with 1.4µm large sensor pixels for better low light performance. The phone also has a AI System to make self-portraits (and the faces of people) look better.

Software features wise, There is a scene-mode, tilt-shift feature (for better bokeh), HHT mode (to create better low-light pictures), and the beautify mode (to make the faces of you and me look more…photogenic? XD) 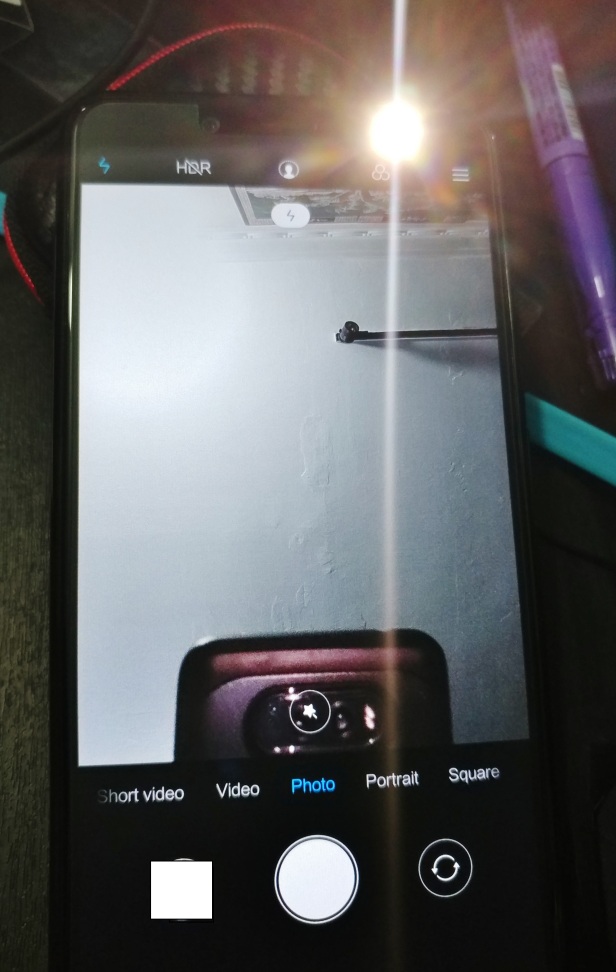 While I didn’t see it taking top spots in formal camera benchmarks, In reality, the phone works as well as advertised! Here are some unedited pictures I took, on the go:

As you can probably see, the phone’s picture quality is really good for a budget phone. Even in the Taxi, (Which represents slightly darker photo conditions), the pictures taken still have enough detail resolved.

The landscape shot of the prawning area above, however, seems to be abit-soft.

The selfies from the front camera actually looked good too, but i’ve lost those photos. – but i will upload if i ever find them.

–This actually surprised me the most. The phone feels very fluid when moving across apps, typical of Xiaomi’s optimized android OS. But what I did not expect was how good it’s benchmark test performances were.

With just 3GB of Ram, i never expected the CPU on this one to handily beat my LG V20 (which has a Snapdragon 820 CPU!).

Granted, the GPU isn’t as strong as the Snapdragon 820 equipped phone (LG V20). But having a strong CPU is great, and shows it’s prowess best when you try to multitask with multiple apps running. You could update the phone’s apps in the background, and work on something else, and the phone didn’t feel sluggish at all.

I loved the Redmi Note 5’s performance so much in this regard…And was almost tempted to take the phone as my daily driver instead, and give my current phone as the gift instead. But i’m a great guy, so….i didn’t do that. XD

3GB of Ram seems enough for most activities – But if you’re gaming or really multi-tasking alot, i’ll encourage you to get the one with 4GB of RAM.

For the geeks, Here are the benchmark results from my device: 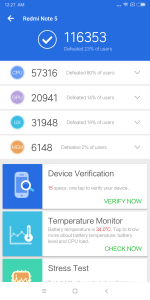 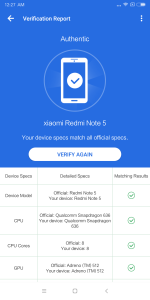 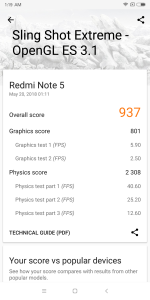 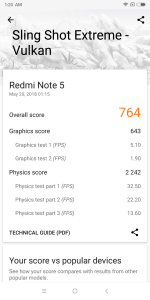 Overall: For $299, this phone is almost unbeatable value-for-money. With it’s Excellent performance, Good camera and Display, you would be hard pressed to find a better phone for your money.

Unconvinced? Try it for yourself at a Mi Store near you!

Note: If you’re buying this product, You could buy online via this link below. The link below hooks you up to the official Xiaomi Store in Singapore, so you can be assured of a genuine device with full warranty support. after clicking the link below, Click on the phone picture to get to the website. Buying via the URL link below will not cost you any extra charges, but will help in supporting my website. Thank you!

Found my articles informative? Share them now and help someone else too! :)

HAHA, I never thought someone would ever do that. This is next level 🤣🤣 #GeekJokes #USB #ComputerJokes #TechWithAaron
LIM CHEE GUAN Bak Kwa goes online! Buy now before the website gets overloaded with scalpers and whatnot! You heard it here first! Follow #TechWithAaron to stay updated on all things tech. #LimCheeGuan #BakKwaSG
Grizzly: "Yippie, It's Christmas! Y'all can't take of your masks without getting scolded by the ambassadors, but I can! 😜" #WeBearBears #GardensByTheBay #WinterWonderland #WalkOfLights